Haripur is both a city and a district in the Hazara region of the North-West Frontier Province of Pakistan. Haripur District has the highest Human Development Index of all districts in the NWFP. Haripur District is situated at latitude 33° 44′ to 34° 22′ and longitude 72° 35′ to 73° 15′ and about 610 meters above the sea level.To the north and west of Haripur are Pashtun areas – these areas have come under the threat of the Taliban. However the people of Haripur are mainly Hindko speakers and unlike the Pashtun areas, which have been susceptible to Taliban influence, Haripur has resisted and acted as a buffer their spread.[1] Following the campaign against the Taliban in Swat – many militants tried to find haven Haripur, particularly in the camps for Afghan refugees however local people have been assisting authorities.

The area is rich in natural resources and holds special significance because of two very important water reservoirs – the Tarbela Dam and Khanpur dam.

This district has high importance from geographical point of view. Because it is known as a gateway between Hazara division and NWFP and other side its boundaries attached with the capital Islamabad.

The biggest mud-made dam, the Tarbel Dam is also situated here on the river Sindh. This dam produces 2200 megawatts of electricity to fulfil the country’s energy needs.

One of the well known places of the district Haripur is Khalabat Town named after a village now under Tarbela Dam lake. It is a well planned town with a population of around 35,000 and is located at the bank of Tarbela Lake and is home to those displaced by the Terbela Dam. 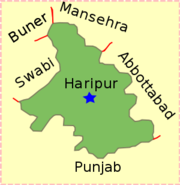 Among other famous places are: Bandi Seeran (95% people are working overseas especially in gulf) Thipra (one of the village of Pakistan where litracy rate is 100%), Mirpur, Baldher, Rehana, the home town of (former president of Pakistan) Field Marshal Ayub Khan, Sikanderpur, Dervesh, Kot Najibullah,Bhera, Khanpur(Tehsil), Beer, Gorakki, Alluli, Sarai Nehmat Khan,Mora Mamdooh, Mankrai (an old Turkic settlement which is famous for its old ruins), Sarai Saleh, Ali Khan, Shah Mohammad (For variety of plant nursery’s) and Sirikot. The major railway station of Haripur city is actually located in Pandak village near TIP. One well known place of the district is Jagal, it is near the KTS (Kahlabut town ship) – it is very big village. One more very big village is Dehdan (Dahdan). On karakurm highway 13 km west of Haripur.